A Journey along A Road Less Traveled 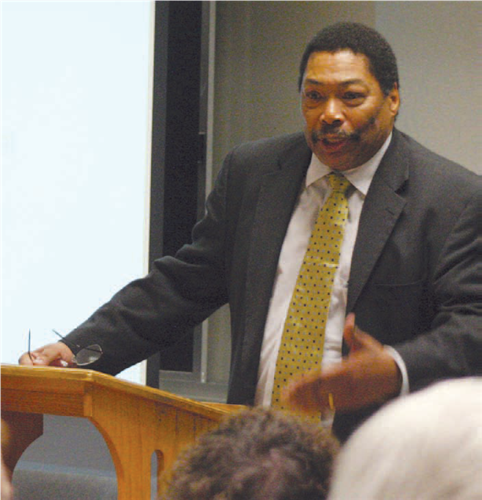 Pastor Flanigan’s story has elements of the stories of Abraham and Sarah, of Dr. Martin Luther King, Jr, the man beside the pool, and St. Paul. There may even be an element or two from Jonah’s story.

Born into a family with parents who were steeped in their faith, and determined, to raise their four children to be loving and productive adults despite racially oppressive and limiting conditions. Everett Flanigan started first grade at age five in a two room Rosenwald school (Schools set up for African American students in the early 20th century, when states refused education to them) in south Fulton County, GA. Sixteen years later He found myself at college with a major in Chemistry, followed by a master’s degree in chemistry and biochemistry and at age 26, a PhD in molecular biology and biochemistry from Washington University in St. Louis. His road less traveled led was cemented with a personal mission to help people by working towards alleviation of suffering and pain. Flanigan’s mission came when he attended a speech by Dr. Martin Luther King, Jr. as a teenager.  As a seasoned researcher in the biopharmaceutical industry, and with several patients, publications, presentations in the US and Europe, Dr. Flanigan lived into the mission as Senior Director and Distinguished Scientist for US Technical Operations for a global company and as well leading the research and development units in the US and the Exploratory Laboratories in Germany. Dr. Flanigan moved to another biotech company as Executive Vice president Still working on therapeutic articles designed to improve human health and alleviate suffering.

Along the way, the road led me Brookhaven National Laboratory in New York for post- doctoral studies; continuing education at Harvard School of Public Health for Research Management training, Kellogg Graduate School of Business at Northwestern University for Leadership Studies and Pacific Lutheran Theological Seminary for theological studies. While traveling on a less traveled road various communities called him to a number of tasks: the local community in Illinois called him to lead the local branch of the NAACP, to chair a United Way Campaign, to serve as founding president of a youth symphony orchestra (still performing after 20 years), as President and chair of the Board of a community action program and as congregation president and council chair of his local Lutheran Church.
At the national level, he was elected to chair the United States Adopted Names Council, to service on a task force to monitor and prevent the spread of “Mad Cow” disease, a committee to find root causes of death by patients using certain drugs.

Flanigan also served on National Science Foundation grant review panels for undergraduate science education, and national institutes of health panels for research and experimental production facilities, and study sections for research grants. He represented and spoke on behalf of US biotech companies and the United States Pharmacopeia at international gatherings. For many years, he was one of three persons of African Descent to head research units of major pharmaceutical companies.

An early morning call from a bishop’s office changed everything. He was asked to apply for a leadership position at the churchwide office in Chicago. Flanigan was selected to direct the office of African American/Black Outreach, and a separate office of outreach leadership the later office identified and selected mission developers and redevelopers. After a few years, and a resignation of the pastor at his local congregation, Dr. Flanigan entered the TEEM (Theological Education for Emerging Ministries) and was ordained in 2015. He was called to by the ELCA Church Council for service in Southeastern Synod and to re-open the Lutheran Theological Center in Atlanta. His ministry is informed by multicultural/diversity engagement and by bringing people together in worship, learning, and conversation. Flanigan has taught as part of a team classes at Lutheran School of Theology at Chicago, has lectured as Luther Seminary and led workshops in congregations in all four states in Southeastern Synod and at Synod assemblies.
This year the Flanigans will celebrate 42 years as Lutherans, this part of their journey beginning in Yorktown, New York through Kankakee, IL and now in Riverdale, GA. It has been a long and winding road. People frequently ask how can a person trained as a scientist be a practicing Christian and preach the Gospel. They are frequently given the answer:
Come and see!