Gardening in the Time of the Coronavirus 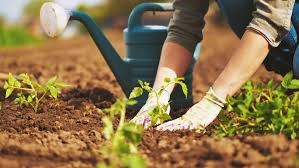 He sunk his spade into the wet earth, clayey though it was and it resisted even what had been softened up somewhat by the copious deluge of rain that had recently brought more than wetness, also wind and hail and the tornadoes, one of which had scathed a path just two miles away in the last storm.  Watering the garden had been redundant recently, not like last summer when the September weather had continued its climb towards records made and broken the year before.  The hydrangeas had had to forego their preference for plenty of wetness owing to the march of climate change that broke records now more often than the runners of miles.  Of course they had not willingly foregone anything but had had to adapt or die.  The ferns, for it was a shade garden, had also called it quits early in the season owing to the heat and drought too.   The hostas soldiered on, sticking close to the dry earth,  and got away with premature yellowing of the leaves.  He came back from a trip in October to be greeted by the sorrowful scene of his doted upon garden. He should have expected it since he had been bemoaning the excessive swings and intensity in  the weather for years already.  But now he was locked down and had ventured to make lemonade in his postage size back yard out of the lemons of seclusion, invisible though they were. Actually he loved the  taste of lemon and solitude. He had always found the garden a delight too.  It gave him an opportunity to lavish his planning and caring on the earth that he felt was his, not only because he paid the mortgage monthly for the land, but because he owned his sense of responsibility to help the earth exhibit its glories as much as this was possible in a city’s backyard.  He had never been attracted to become a farmer, though he had spent many a happy week strolling and exploring, hugging the ragged escarpment of his great uncle’s farm in the northeastern part of South Africa, keeping an eye open for poisonous snakes about which his uncle had told stories of luck and loss.

He had loved the way nature took him out of his books and pushed him to find new books that spoke to the experiences he had had in the real world of rocks and soil, trees and crops. He had always felt the seasons and their changes were marks of real life being lived.  What one read in books was one step removed from real life, as removed as reflection was from action, as removed as meaning was from being.  It was music to his ears to hear the wind or rain and to spot the choir of nature when it performed in plain sight.   He remembers how his mother was most happy in the mornings, the best time of the day she adulated, and how living in the basement of his parents’ home, where his room had opened out onto the garden that his father had spent so much after work -time tending  to, trying to forget that he would return to work in the morning.  Now that the corona virus had struck, he knew better what he knew anyway, that the real things were swaying in the breeze of spring rather than in the pages of a book or the flashing screens of TV’s.  He knew that he could sit with aching legs after a day of digging and bending and lifting and snipping and transplanting, and with a cocktail of gin and ginger or some other startling concoction of the earth’s good gifts.  He could give thanks for the body ache, the progress, the shaping of wild nature in small ways, the glory of the sprouting shoot and blankets of yellow pollen that coated the surfaces of everything like spring snow.  He looked forward to sitting again after his current project was completed.  And he loved that the job was never completed, it only left more to be envisaged and done another day.  And he was only very minimally responsible for what took shape.

As he sat, a little bird rather daringly flew close by towards the house.  Actually it flew in stages, first from a nearby tree, then on a brick shelf along the house, then to the rim of a copper-plated fountain, a portable one that hung on the wall three feet from where he was sitting.  He had not filled the fountain with water this year, partly because it operated not on gravity alone,  there was a little electric pump that took the water back up to fall again into the bowl before being pumped back up again.  The electric Sisyphus keeps on keeping on.  He would have preferred a fountain that was powered by nature alone.  But now the fountain had another use.  There were certainly several parental birds, or maybe they were siblings or just a village of helpers, that were carrying small sticks or were they worms into a nest that had been laboriously built within the bowl of the fountain.  At daily dusks they watched the progress.   It was exciting to hear the little murmurs of tweets that soon came from the nest.  There was new life in the bowl of the manufactured fountain which had become just another natural bowl of the environment.  It wasn’t long before they used their little screens to check the names and faces and tails and colors and sounds of hundreds of birds.   They settled triumphantly eventually on the humble house wren.  A little bird with a big sound, it turned out to be.  They gasped as they saw one sitting on the fence at the edge of the garden.  What they saw was a little throat moving quickly up and down, and in synch with the throat was the tail which shot up at a point in the full throated  squeal.  How could that little creature produce such a siren of noise? Who or what was he or she addressing?  Was the bird flagrantly boasting at the completion of another nest?  Was the bird communicating to some little babies inside the nest that it was time to drop into the world of cats and mice and squirrels and maybe a snake or some other creature ready to cut life short for these ones who had been so carefully protected?  Did the protectors ponder the limits of their responsibilities and powers?  How on earth did they make so much noise?  What is the cycle of life and flight and death like for these beings?

The corona virus had made him think.  Was nature so clever as to be able to communicate to us about its needs?  The pope and plenty of others seemed to think so.  Or maybe it was simply a conscientious human way of reflecting on the incongruity and unbelievable contradictions of the present situation.  He knew he was lucky to be sheltered in place and to be able to receive deliveries of the food they needed.  He knew that small voices could crowd out the loudest in the room.  He knew that little acts could re-shape the lay of lands, far and wide.  Like Gandhi or Martin Luther King, a microscopic virus shaped to hook itself into the mucous of human and animal nostrils and create havoc in all the organs of the body demanded to be taken seriously.  We are our viruses we are reminded by the scientists.   Despise not the little ones.  Away in a manger, no crying he makes.  I like gardening because it instills in me patience and promise, no telling what is chaff and what is wheat.  We live and die like vulnerable birds seeking shelter before emerging.  The process is not without risk.  The earth to which we all return in good time, or more quickly than what we think is good, is our teacher and our lover and the hard wall on which we crash in our moments of ignorance or tiredness, even when it’s not the end of the day.
Blog