Feet That Carry the Good News 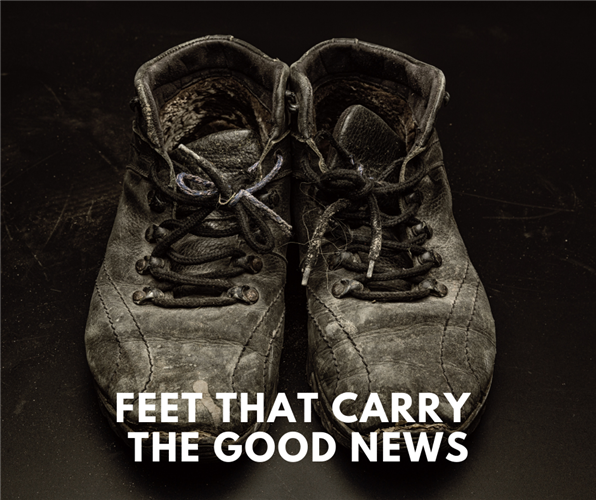 It was a beautiful late November day and the Food Ministry at the Lutheran Church of the Atonement was preparing to leave the church grounds.  There was a feeling of what I like to call bonhomie among the group as well as a sense of accomplishment. The weather was brisk, but the sun was shinning brightly.  All the food had been given away and quickly.  It was time to go home.

Since the church had received a food grant earlier during the summer from the Southeastern Synod, the church has had a sense of mission, an ownership of the need to assist the food insecure in the community.  We had also received assistance from St Luke Lutheran Church and a generous check from Redeemer Lutheran Church.  Our 2021 budget contains a line item for a continuation of the ministry.  The Synod’s air of stewardship, giving not from a place of scarcity, but abundance seemed to permeate our congregation. There was gratefulness for the goodness of God even in a year of a pandemic, and political and civil unrest and other areas of giving were being explored.  As we prepared to leave, we noticed another coming for food.

Two of us approached a small elderly man and others watched.  We explained that we had no more food.  But he explained that he had received food earlier.  He asked for shoes.  What he wore on his feet were shoes with very thin soles.  One of the shoes was kept on his foot by a belt tied in a knot.  It would soon be cold and the socks we gave out would not be enough.

Our congregational president asked about his shoe size.  He responded that he did not know.  She took off her shoes and he was able to squeeze his foot in one but it was obviously too small.  She stood shoeless and barefoot in the parking lot.  Then comes a congregational deacon in a pair of expensive looking sneakers.  He removed his shoes and our homeless friend’s feet fit comfortably into the shoes.  Our deacon was now also shoeless in the church parking lot.

It was not barefoot weather and they would have to drive with no shoes. But as I looked at their feet, I thought of the text in Romans that declared the beauty of the feet that bring good news.  And the feet I was looking at were beautiful.  They had brought good news to a homeless friend.  Warmth in the coming cold.  Genuine love and care for someone who needed help.  A desire to give away something they needed to someone who needed it more.

It was what another member described as a Hallelujah moment.  A moment of praise and thanksgiving to God for God’s generosity and grace to us; not just with words, but with acts of love.  Giving not from scarcity but from abundance.