Add to my calendar

“Reckoning with Racism and the Heritage of the South: A conversation with Robert W. Lee on the call to preach, teach, and confront racism.”

On Tuesday, July 21, joining Bishop Kevin L. Strickland for a conversation over Zoom was with The Reverend Robert W. Lee, IV.

Bishop Strickland opened the conversation with the following prayer:

Some of you asked for the prayer that Bishop Strickland used to open the conversation.  Here is the prayer:

Prayer for Racial Justice
Save us, O God, from ourselves,
from racism often cloaked in pious words,
from the machinations of white supremacy hidden in calls for civility,
from microaggressions thinly veiled in arrogance,
from apologies when they don’t give way to action,
from forgiveness without facing the truth,
from reconciliation without reparation.
Deliver us, O God, from expecting siblings of color to continue to bear this emotional work,
which is not theirs to do.
Grateful for the long arc that bends toward justice, we pray:
Grant us wisdom,
give us courage for the facing of these days,
by the power of the Spirit, all for the sake of the kin-dom that we share in Christ Jesus.

If you wish to purchase a copy of Rev. Lee's book, 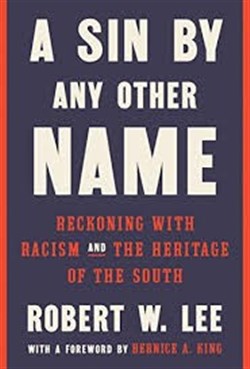 The Reverend Robert Wright Lee, IV is an author, activist, commentator, and preacher. Lee is a native of Statesville, North Carolina and graduate of Duke University Divinity School in Durham, North Carolina. He received his Master of Theological Studies in May of 2017 with a focus in practical theology and homiletics His thesis was on the corpus work of Bishop Will Willimon.

Lee completed his undergraduate work in Religious Studies and Appalachian Studies at Appalachian State University where he met his wife Stephanie. He is currently pursuing a PhD at Chicago Theological Seminary.

Rob has written extensively for both secular and religious news outlets. Rob's work has appeared in outlets such as NPR’s Weekend Edition, Ministry Matters, the Methodist Federation for Social Action, the Huffigton Post, the Common English Bible: Student Edition, and the Washington Post. He has preached from notable churches such as the Historic Ebenezer Church in Atlanta, the American Cathedral in Paris, Rockefeller Memorial Chapel in Chicago, and Harvard’s Memorial Church in Cambridge. He has given lectures at universities across this country such as Union Theological Seminary in the City of New York, The University of California at Davis, Arizona State University, and St. Michael’s College in Vermont.

Rob, a nephew, generations removed of General Robert E. Lee has been engaged as an activist in the field of racial reconciliation. He participated in the 2017 MTV Video Music awards and was on ABC’s the View where he spoke about the need to confront white supremacy and white privilege in white churches. Rob has written one book titled “Stained-Glass Millennials” (Smyth and Helwys 2017) his second book “A Sin by Any Other Name” was released in April of 2019 by Penguin Random House, Dr. Bernice King, daughter of Martin Luther King Jr. and Coretta Scott King wrote the foreword.

Rob is presently serving as pastor of Unifour Church, an open and affirming community of faith in Newton, North Carolina. Rob was baptized and raised United Methodist, at Broad Street United Methodist Church in Statesville, and was ordained in the Cooperative Baptist Fellowship at First Baptist Church, West Jefferson. Lee lives in Statesville, North Carolina with his wife Stephanie and his poodle Frank.