Members of the Evangelical Lutheran Church in America (ELCA) gathered for the 2022 ELCA Churchwide Assembly Aug. 8-12 at the Greater Columbus Convention Center in Columbus, Ohio. Meeting under the theme "Embody the Word," the assembly participated in plenary discussions to make decisions about the work of this church. They also spent time in worship and Bible study.

The triennial gathering — the highest legislative body of the denomination — was composed of more than 900 voting members serving on behalf of the 3.3 million members of the ELCA. The ELCA's 65 synods elected voting members to serve at churchwide assemblies.

Find the summaries of each day of the Churchwide Assembly here:

35TH ANNIVERSARY OF THE ELCA OBSERVED

In April 1987, the ELCA constitution was adopted in Columbus. The ELCA was formed from a merger of three Lutheran churches – the American Lutheran Church, the Association of Evangelical Lutheran Churches, and the Lutheran Church in America. Watch Video >>

COMMISSION FOR A RENEWED LUTHERAN CHURCH

The Assembly voted to study church structure and make recommendations to the 2025 Churchwide Assembly for amendments and changes. In summary:

The Assembly called on Church Council to consider commissioning a study of pay gaps among ELCA rostered ministers and to share the findings throughout the church. The adopted memorial also encourages Portico Benefit Services and the Churchwide organization to revise bylaws and privacy policies to facilitate deeper understanding of compensation patterns among rostered ministers and calls for an update to compensation-related questions in the Rostered Minister Profile.

The Assembly encouraged support and prayer for people affected by the overturning of Roe v. Wade, including rostered ministers and lay staff at congregations and social ministry organizations. It also called for conversation on the church’s teaching on abortion and related topics, as well as synodical reviews of the impacts that overturning Roe v. Wade and other related local rulings may have on pastoral counseling and the pastor-client relationship.

SPECIALIZED MINISTRIES AND ON LEAVE FROM CALL STATUS

The Assembly directed the Church Council to establish a process for examining policies, procedures and constitutional provisions related to specialized ministry calls and on-leave from call status, as well as protocols for removal from rosters and communication on such actions. The memorial also urges bishops and synod councils to use sparingly any action that removes a minister from the roster for nondisciplinary reasons until this review process is complete.

The Assembly reaffirmed the church’s commitment to engage in creation care and to act in support of 50% reduction in 2005 U.S. levels of greenhouse gas pollution by 2030 and achieving net-zero emissions by 2050, including having the churchwide organization meet these goals. The memorial also urges continued work with the Creation Care Network, encourages congregants and rostered ministers to witness to the climate emergency and affirms the Mission Investment Fund’s “Green Building” initiative.

The Assembly authorized the Church Council to determine parameters, expenses and revenue sources to provide for an external audit of the “Constitution, Bylaws, and Continuing Resolutions of the ELCA” that examines diversity, equity, inclusion and accessibility in the church’s governing documents. The memorial calls on the Church Council to report the findings of the audit and directs the legal committee to recommend changes.

Presiding Bishop Elizabeth Eaton offered a public apology to Iglesia Luterana Santa María Peregrina and a made a public commitment to be an anti-racist church on behalf of the ELCA. Watch Video >> 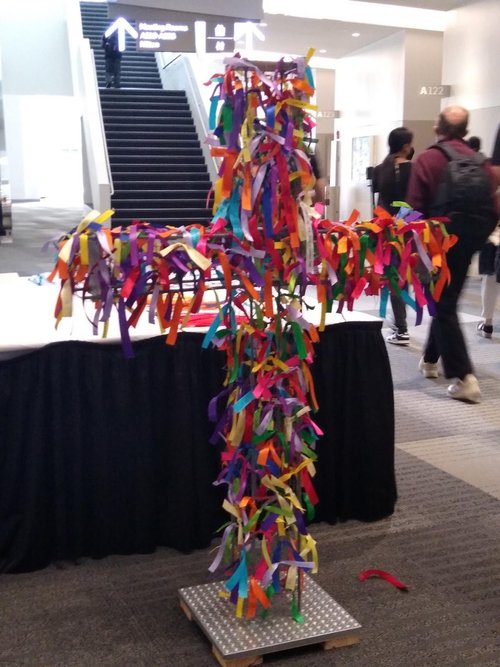 During the apology to Iglesia Santa María Peregrina, Bishop Eaton offered an opportunity to write prayers on ribbons and tie them to a cross in a show of solidarity and support.<

The Churchwide Assembly honored and celebrated Indigenous people through presentations and worship during the weeklong event: