One of my favorite descriptions of stewardship is, “When God gives you a gift, hold it loosely.”  I understand that statement to mean that whatever God gives us is not exclusively for our benefit, but is intended for the whole family of God.  In October, I was blessed to become pastor of a church that in my estimation, does a masterful job of holding God’s gifts loosely.  And as much as I would like to claim credit for their devotion to being stewards of God’s gracious gifts, the people of Triumphant Cross Lutheran Church in Dothan, Alabama have held that attitude for the whole 12 years I have known them.

In its almost 40 years of existence, our congregation has actively supported many ministries that are vital to the Dothan Community.  This support includes monetary gifts to the Southern Alabama Regional Council on Aging, Wiregrass 211, and House of Ruth (shelter for victims of domestic abuse).  We also support Mama Tina’s Mission House by providing regular meals to feed the hungry and homeless in our area, and giving Christmas gifts to children of families who struggle financially.  A couple times each year, our congregation holds yard sales, and almost all the profit from these sales is used to support ministries to the local community.  More than any congregation I have ever encountered, our people find joy in sharing the riches God gives us.

Our congregation’s loose hold on God’s gifts is also manifest in the sharing of our time and talents.  We have a prayer garden which regularly needs muscle power, so in church, on several Sundays each year, our volunteers are moving a bit slower after the previous day’s hard work in the garden.  We also have several members who share their musical talents on organ, piano, guitar, violin, flute, and voice on special occasions.  We have members who have gifts of teaching, preaching and leading worship, one of whom will be attending Seminary after she retires from the military.  And I am convinced that whoever calls Tiffani Heinreich as their pastor will have a tremendous preacher!

Over the course of my association with the congregation, I often wondered how they had developed their dedication to holding onto God’s gifts loosely.  On October 25th I had to wonder no more.  On that day, the people of Triumphant Cross decided, despite COVID, to get together and have a socially responsible 3-fold celebration.  So, during the worship service, I was installed as the pastor, we dedicated our new organ, and after the service, we retired the church’s mortgage!  As part of that celebration, we remembered and praised God for our brothers and sisters in Christ who held onto God’s gifts loosely, and who taught us, and enabled us to do likewise.

Triumphant Cross began as a mission congregation of the American Lutheran Church (ALC) and held its first worship service on August 1, 1982, in a building rented from the Dothan Garden Club.  Construction on our present sanctuary began in 1990 thanks to Mission Builders under the leadership of a retired general building contractor named Warren, from Ohio.  Mr. Warren organized laborers who included not only members of the congregation (at least one of whom worked on the roof while she was pregnant), but also several farmers; one couple from Minnesota, the Millers from Nebraska, the Busses from Illinois, and the Westons from Iowa; and Mr. Kinsey, an insurance actuary from Wisconsin.  Amazingly, during construction, it only rained on Wednesdays and Sundays, the only days the builders took off.  Additionally, a new brick company had just begun operation in Dothan, and agreed to provide bricks at cost for the construction, and a bricklayer agreed to lay bricks for the low rate of $160 per 1000 bricks.  So, on July 14, 1991, the members held our first worship service in our brand new sanctuary!

The plans for Triumphant Cross included not just the finished sanctuary, but also the unfinished Sunday school wing.  To save money, the congregation resolved that they would work on the wing gradually, on their own.  But once again, another congregation was holding its gifts loosely.  Our sister congregation, Messiah in Montgomery, had a group of Mission Builders working on their sanctuary.  However, at that time, Montgomery was experiencing regular rain storms.  So, on the days the Mission Builders could not work at Messiah, they came and worked on our Sunday school wing.  By the time these Mission Builders left Alabama, the exterior of our wing was finished and the interior was sheet-rocked.

Even after the church building was completed, the gifts kept coming from hands that held them loosely.  One rather humorous story stems from the Lutheran congregation in Thornville, Ohio.  A member of that congregation had served in the Army at Fort Rucker, a few miles down the road from Dothan.  Somehow he heard about Triumphant Cross, and said, “If there’s a Lutheran Church in Dothan, they need all the help they can get!” And with that, the congregation in Thornville gave $25,000 over the next three years to support the ministries of our congregation.  More recently, one of our members joined the church triumphant.  And after his death, Ray Kreulen’s children recalled him talking about his desire to pay off the church mortgage.  So, in November 2019, Ray’s son called and informed us that there would be a check in the mail for $38,000, earmarked to pay off the mortgage on our church building!

Praise be to God for gifts held loosely!  They sustain us, and sustain our ability to faithfully minister among God's children.  Thanks be to God! 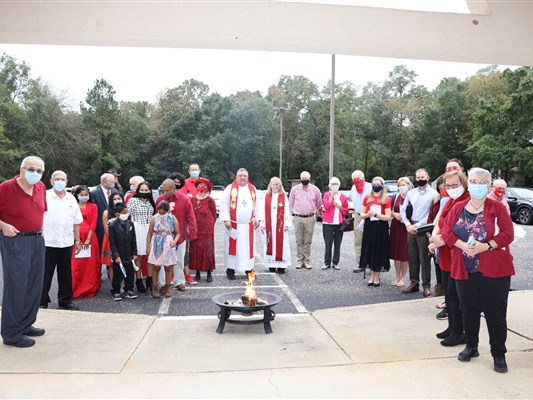