“The Last Supper”… is a story retold, year after year from generation to generation. This year this story was told in a very special way.  So very special that I was not sure what to expect from accepting an invitation to attend the performance of “The Living Last Supper” at Lutheran Church of the Atonement, Atlanta, GA.
Directed by Mrs. Eva Hamer, the Atonement Men in Mission engaged me in a chilling, authentic, yet melancholy reenactment of “The Last Supper.”  The performance transported me to that night in Galilee and left me hoping that I am worthy of the sacrifice.

Called Maundy Thursday, most significant for me as a Lutheran is to think of it as the birth of the Eucharist, the first Holy Communion. The twelve Apostles and Jesus (portrayed by the Rev. Ronald Bonner) would partake of the Last Supper like that of a family feast in honor of a loved one preparing to bid farewell.  Each eating of the bread, signifying Christ’s body, and drinking of the cup, representing Christ’s blood that would be inevitably shed.

Peter (Lionel Gordon) ponders not only over why would he betray Jesus as predicted; but will he really be the one.  He asks the question several times and his voice quivers as guilt consumes him, as you would imagine, more rapidly than the venom of a snake rushing into one’s blood stream, “Is it I”?  “Is it I”? “Is it I”?

Thomas (Clyde Barron) holds steady the pose of the famous da Vinci’s depiction of Thomas; fore finger up, steady stare and the constant presence of shock. He too would ask the question “Is it I”, but not before the betrayer himself.  Judas (Bernard Welmaker, Sr.) has his hand filled with silvers and doubt, each weighing heavily on his heart of disbelief.  (Welmaker’s voice is strong, clear and does not allow his southern lilt to betray the sincerity to which he most dearly clings.)
The voice of the Beloved Sweetheart Gospel singer Mahalia Jackson would soon fill the room singing:

In the upper room with Jesus
Sitting at His blessed feet
Daily there my sin confessing
Begging for His mercy sweet
My attention to the voice is suddenly interrupted, but quickly restored by the glimpse and then full view of the regal and graceful strides of Harolyn Light.  Her arms flinging to and fro rhythmically translating and interpreting Mahalia’s every note; the two made for the perfect interlude between the narrator’s pause.  The narrator is played by one of Atonement’s aspiring youth, Joshua Robinson.  Joshua is careful to set the stage and allow the characters to develop while engaging the audience.

Just when I think this production can give no more, Jesus departs from the Supper table and fully donned centurions appear to place him on the cross.  Rev. Ron Bonner is perfect in this role.  He affixes himself to the wooden cross, clearly made with him in mind, as it is six feet plus of solid wood, and he and the cross become one.  With reeds of thorns on his head and with the strain of the weight, he leans forward; anguished with the pain he struggles to negotiate the width of the altar.   He makes the turn down the aisle, and the audience almost on cue begin to sing “Were you there when they crucified my Lord?” Then he falls to the ground on one knee, as Jesus did many times on that road to his death.
This production was a beautiful way to begin the three-day anticipation of the RISEN LORD.  Although many have seen it many times, it still captivated its audience. Their reaction of shock to witness Christ upon the cross was as intended.
To the Men of Mission of Atonement and the many supporting Women of Atonement, this is a nod of excellence! 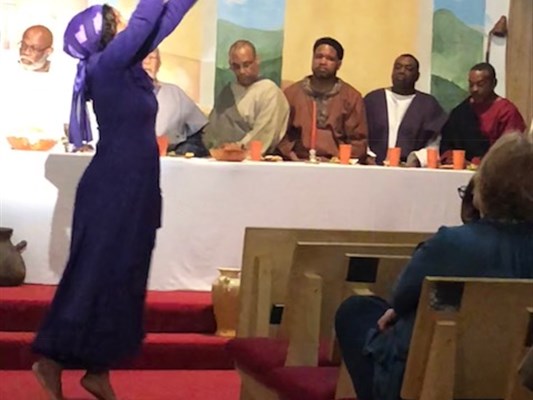 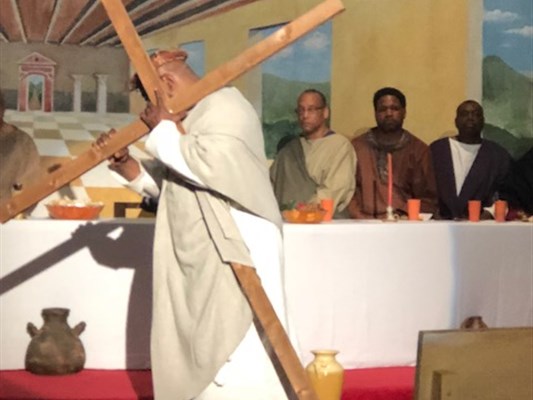 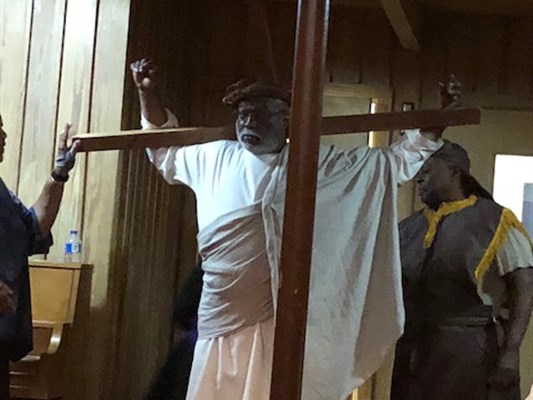