Picture above:  Baptism candidates, from left, Kandie Shubeck, Mike Kemper and Mary Ann Collins try to resist the temptations of Charlie Shubeck, playing the character of ‘Stinkbat’ the horned junior tempter intern trying to disrupt the service, during a skit at Shepherd of the Lake Lutheran Church.

From the April 20, 2022, article by the same name in the Tellico Village Connection, by Hugh Willett

With Easter the most sacred holiday in Christianity, the death and resurrection of Jesus is commemorated in a variety of ways at local churches.

At Shepherd of the Lake Lutheran Church, the celebration of Easter this year involved four days of worship beginning Thursday.

Maundy Thursday is observed in remembrance of the Last Supper, the meal during which Jesus sat down with his disciples and instructed them to love and serve one another, Paula Smith, interim pastor, said.

Smith has been serving for three months while the congregation awaits the installation of a new pastor.

On Friday, readings and hymns marked the day of Jesus’ crucifixion and death.

Smith said she wanted to do something different for Saturday’s Easter Vigil. At the beginning of the service, the congregation gathered outside around a grill where a fire had been prepared.

Church members were given small pieces of paper on which they were asked to write down their fears and other concerns they should let go. Those gathered for the service approached the fire one by one and dropped the pieces of paper in the fire. “

It’s like giving it up to God,” Smith said.

The congregation then moved inside where members presented the final act of a skit, “Water and the Word.”

The short play was written by Steve Dorman, a member of the church. He said he wrote and directed the play years ago when living in New York.

The play is a dramatic comedy about a group of catechumens, or people seeking to be baptized, who are bedeviled by a group of what are called “junior tempter interns” — apprentice demons seeking to disrupt the baptism and prevent the souls of the catechumens from being saved.

Smith, who has an master’s degree in church music directing and has directed productions of Handel’s Messiah, said she wanted to add something to the service that was entertaining and befitting of the Easter celebration.

Easter is traditionally a day on which baptisms were held, she said.

Smith played the role of pastor. The four catechumens were playedby church members Mary Ann Collins, Rod Rowe, Kandie Shubeck and Mike Kemper. All described themselves as “nonactors.” Rowe said he hadn’t done anything similar since a high school play.

Their instructor was played by Susan Kastner. During previous acts of the play performed during prior weeks, the characters are introduced with each facing some particular challenges to their full understanding of their role as baptized Christians.

The demons, or junior tempter interns, were played by Linda Schuessler, Charlie Shubeck and Steve Dormer and led by a senior tempter, played by Howard Kastner.

In the final skit, the demons, dressed in costume with horns and tails, do everything they can to make sure the baptism does not go off as scheduled. Should they fail in their mission, the senior tempter, Gallworm, promises they will spend eternity in perpetual darkness.

Fortuitously, the cleaning woman, played by Claire Moxim, enters the room and begins undoing all the mischief before the ceremony. She has hot water for her tea that sheuses to melt the ice cubes and just so happens to have some spare candles.

Moxim, a charter member of the church, said she didn’t have much acting experience outside of a church play when she was 15 but enjoyed the chance to participate. She said she liked that the play delivered laughs as well as serious messages about faith.

The demons still had one trick up their sleeve — the hidden book containing the words of the baptismal rite. But it turns out the pastor has performed the rite so many times she has memorized the words. The catechumens are baptized, their souls are saved and the junior tempters are banished to perpetual darkness.

The conclusion of the skit was met with applause and appreciation from the rest of the congregation. The service ended in a more traditional fashion following a reading from the Scriptures and a renewal of baptism rite among the congregation, which included each member being symbolically sprinkled with water from the baptismal font.

The church sanctuary was decorated Saturday in preparation for services Easter Sunday morning. 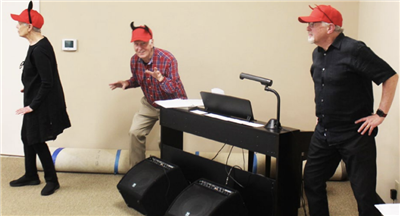 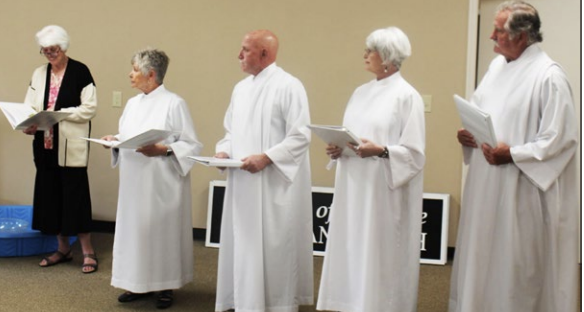 The baptismal instructor, from left, played by Susan Kastner, prepares her four catechumens, played by Kandie Schubeck, Mike Kemper, Mary Ann Collins and Rod Rowe, for baptism in the skit ‘Water and the Word’ performed Saturday at Shepard of the Lake Lutheran Church.